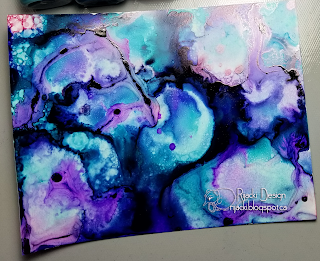 I had a great Crafternoon getting giddy playing with and getting giddy alcohol... ink... with my crafty-friend, Betty, yesterday. We had loads of fun chit chatting and creating. I just took pictures of the ones I was doing and the experiments I did with the media.

Betty had brought over poster board she had bought on advice from a fabulous video from Mary Polenco, linked at the bottom of this post, and shared it with me. She also shared with me some of the Tim Holz Sparkle cardstock. I cut some of the poster board (thick card stock treated on one side) into A2 panels before starting to play. Betty also brought the new Pearls she has but I decided to use just the inks from my own stash this time. Betty also brought over an air poofer (for puffing air off camera lenses) that I did use. 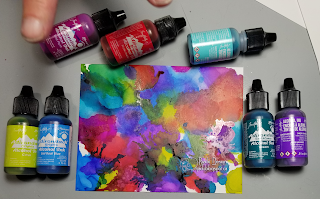 On my first panel with the posterboard, the warming up exercise, I made the mistake of using far too many colours but it's still cool and colourful. Until yesterday, I hadn't really used the inks much mostly because of the cost of Yupo. I used the air poofer to move the ink when it was wet. I used a little bit of isopropyl alcohol with a mister to aid in the moving and blending. (Betty's fingers in the picture *laugh*) 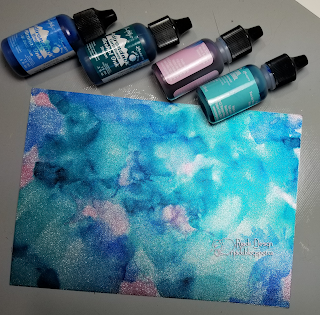 I then decided to try the Sparkle paper and limited myself to 4 colours. The shimmer through the ink is really pretty. 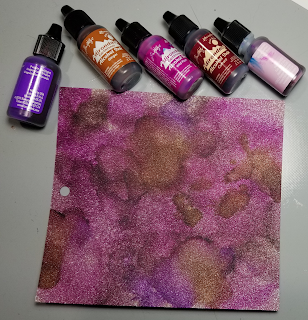 On a whim, I wanted to see if the same effect, or at least similar, could be had with Glitzy paper by DCWV. The Glitzy glittery surface isn't as fine as the Sparkle, but the inks were blendable and movable. 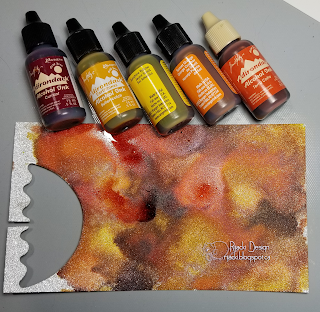 So then I decided to try the Recollections glimmer paper very similar to Glitzy and my results were similar as well.

The Recollections might be the cheapest of the three depending on sales and whatnot. The Sparkle paper did have the best effect, but the other two were similar enough I would take the cost savings for most projects. 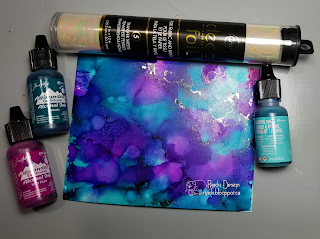 I went back to the posterboard and used just three inks with Blending Solution and isopropyl alcohol in the mister and an eye dropper. I then added some foil to the drying ink. The foil just adheres to the sticky ink so mostly only on thicker ridges and such. I used opal foil for a subtle look. 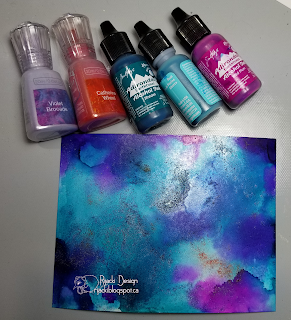 I then thought about my powders and wondered how they would work with the ink. I used the same 3 inks, blending solution, and isopropyl alcohol then added poofs of Nuvo Shimmer power. The results are interesting and stunning, adding a bit of texture both visual and actual. 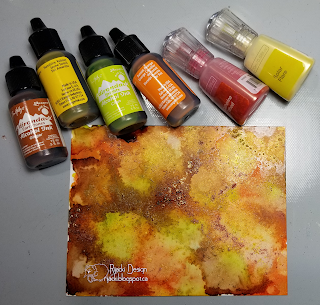 I tried it again with a different colour combo, loving the effect. 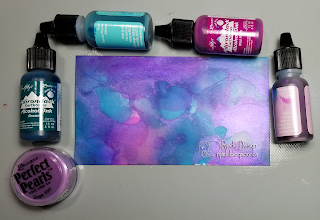 I have a lot of Perfect Pearls so I decided to try them, too. They're not is a convenient poofy container so I tried to just tap some out. On my first experiment, I got too much powder and ended up brushing them in. I got a really pretty pearl effect. 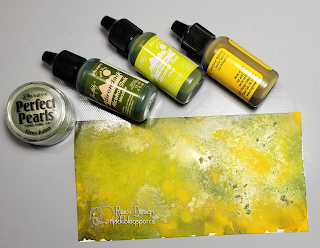 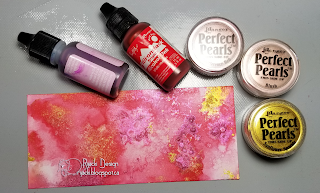 I tried again with another combo and am mightily pleased by the results. It's interesting how the two substances work together. 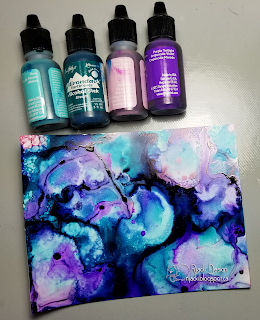 So then I massively saturated a Yupo panel using 4 inks. I also used my heat tool to try to 'freeze' some of the tiny cell effects from the isopropyl alcohol in a mister. This panel made both Betty and I stop and just stare in awe for a bit.

Before getting to this panel, I had noticed interesting effects when I saturated the panel and kept adding even more ink. Counterintuitively, if you put down light inks first then dark and move the ink with isopropyl drops and mists and blending solution squirts, the lighter colours that adhered to the bare card are revealed and you can get some amazing results.

I think the Yupo is just every so much slightly shinier when it's all dry. With so much ink, parts of it still look wet even when they're dry. I'm going out today to get more Yupo from an art store. I ran out of the non-Ranger Yupo I had. 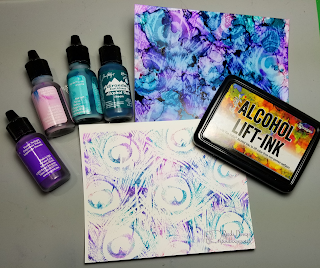 So, the reason I had tried the Yupo again was for ink lifting. I tried it with the posterboard, (picture below) and didn't get as good of a lift on the inked side though the stamp from the lift was gorgeous. I decided to try it on one of my last few panels of Yupo. The lifting and stamping from the Yupo is just the tiniest nudge better. I still wasn't getting a good lifted result on the inked panel, though, but that might also be because of the stamp pattern and the way I inked. 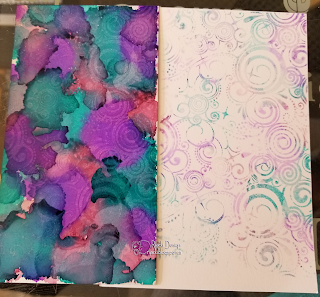 I forgot to take a picture of this pair in my craftroom yesterday (with better lighting). This is the alcohol lift on poster board. I used the same colours as the Yupo lift. Some of the differences in colour is due to the lighting for the pictures, but the colours are just a nudge richer on Yupo than the poster board. Unless they're side by side, I don't think you'd notice. 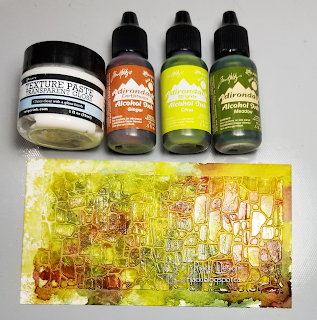 Since it was close to dinner, I decided to prep some stencil experiments. I put transparent gloss through a stencil on to poster board and let it dry (dinner and a movie) before adding inks. The transparent gloss not only did not act as a resist, while the ink was wet, it was sticky. However, once dried, it does have a cool effect and did become glossy again. 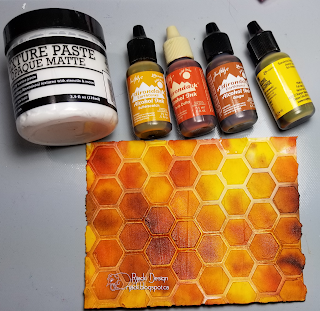 Next is opaque matte. The paste absorbs the ink differently than the poster board. Lovely effect. 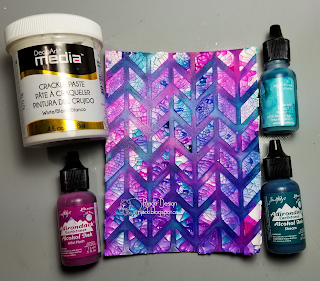 I also wanted to try crackle paste. My curiosity was how the ink might react with the crackles. This paste is an opaque gloss. It did not get sticky with the ink nor did the ink absorb much into the paste. It mostly puddled and dried. The final effect is stunning and reminds me of stained glass. 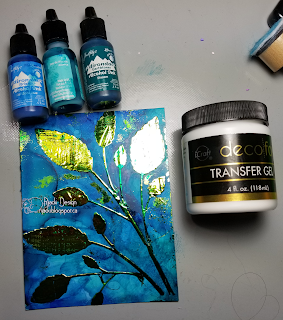 My last experiment was with transfer gel and foiling (foil donated by Betty since my colours weren't, well, right). I used isopropyl alcohol on a felt with a blending tool to wipe most of the ink off the foiled leaves. I'm chuffed with the experiment and want to try it again.

These are all going in my 'backgrounds' box for now until I figure out what I want to do with them.

I need more alcohol ink colours now and more Yupo and more other stuff. I'm also considering getting Pinata inks for their economic price point. We're also entering the season for garage sales sponsored by the 2 local scrapbooking stores. Those destash sales start in 2 weeks. I hope to find more alcohol inks there (all that I have now were from such sales). I used all the colours in my stash except Espresso and the two metallic mixatives I have.