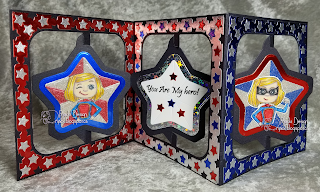 "Here's to strong women! May we know them, may we be them, may we raise them!" Strong women are my heroes! My accordion card features Kraftin' Kimmie stamps, inks, and stencil, Karen Burniston dies, Prismacolour pencil colouring, loose glitter, and foiled cardstock in an explosion of stars and superness.

I am a horrible impulse buyer. Sometimes I will even buy something for my stash and not get around to using it for quite a while. The dies for this card was one of those. Sadly, they're discontinued from Elizabeth Craft Designs because the designer, Karen Burniston, is not no longer working with them. She now has her own independent company but didn't take the ECD designs with her. So, if you want this cool card die (and the accordion can be more than just three panels) or the star frame, get 'em when you see 'em.

I decided to use the super women busts I had coloured while colouring the image for a card last month, Super. I dry fit the images on the dies for the card base to make sure my idea was going to fit. 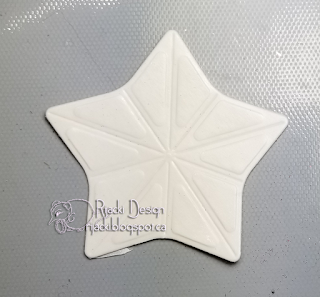 I covered a doubled up panel with adhesive using the Xyron 510 the same way I did for Dance and die cut stars to glitter them. 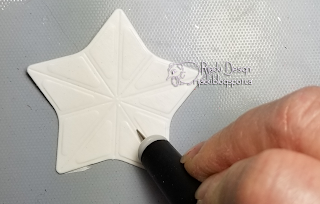 The lines are not fully cut in so I used the sharp point of the craft pick to cut through the release sheet. 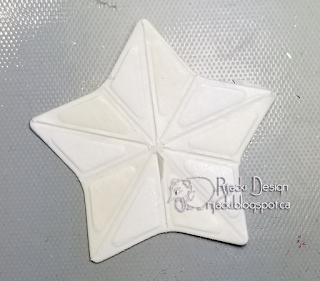 I removed every other section on the star. 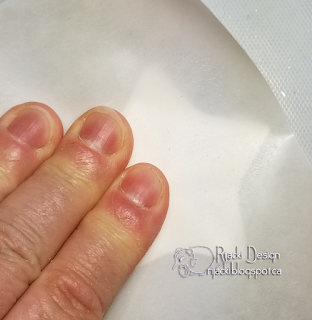 I then used another release sheet to push down the sections I didn't remove to make sure they fully adhered to the adhesive. 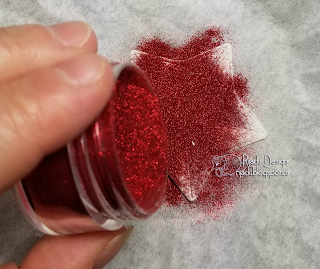 I dumped red microfine glitter on the exposed adhesive, 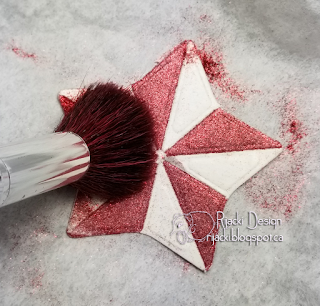 brushed away the loose glitter with a soft makeup brush from the dollar store, 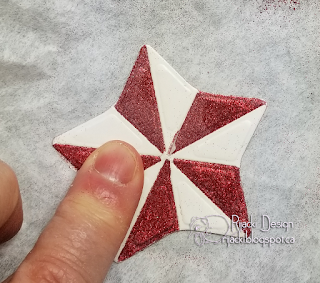 burnished the glitter with my finger which shines it up and makes sure it fully adheres, 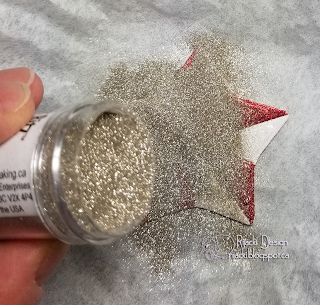 and repeated with the silver. 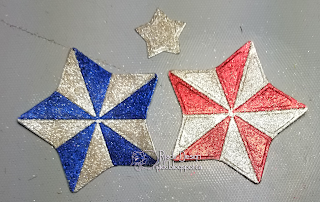 I did the same for a blue and silver and covered a small star fully in silver. 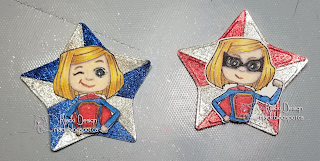 I dry fit the images on the stars and was so happy with how they look.

I die cut the card base pieces from heavy black cardstock and adhered them together on the frames but not the stars so I could work flat to embellish. I dry fit the stars, images, and sentiment again. Not for the first time, I was a little concerned the black wasn't the right colour for the base but assured myself it was going to work out. 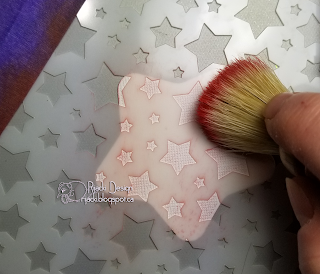 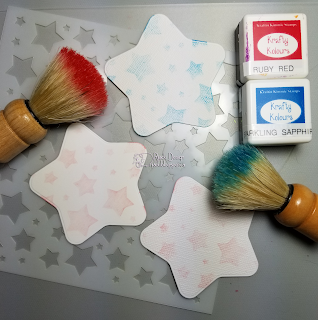 I did two in red and one in blue.

I put these stars on the 'back' of the card after stamping the front sentiment on one of the red ones. I added the glittered silver star to the sentiment.

I die cut red and blue foiled paper stars as mats for the glittered stars. I cut a white star with the lines for the sentiment and a silver matting star with holographic stars to add behind it. I then started my odyssey of frame cutting. The frame is in four pieces with different sizes of sides in the set which can be combined for frames of various sizes. It's rather smart, but tedious for the die cutting. I cut frame bits from red, blue, and silver foiled card stock as well as Neenah silver metallic which I used on the two back panels to have them more low-key but still matching in with the rest (the star frames on those panels also hides the joins for the card panels).

The frames have stars, so I decided to inset stars from one frame into another. I ended up cutting more stars because the corners only create partials. I made more stars than I needed for the insets so I added a few to embellish the sentiment and back panels. Once I had the star frames in place, the inner me told the other inner me that "I told you so" over the black base being the right colour and not too heavy at all. Speaking of heavy, though, this card does have a bit of weight from all the foil and doubled card.

I used two stamp sets, one for the front sentiment and the other for the images and inside sentiment, three inks, and a stencil from Kraftin' Kimmie Stamps. I also used glitter from Glitter Ritz and Elizabeth Craft Designs as well as the dies from Karen Burniston when she was with Elizabeth Craft Designs. (and a partridge in a pear tree *smirk*) 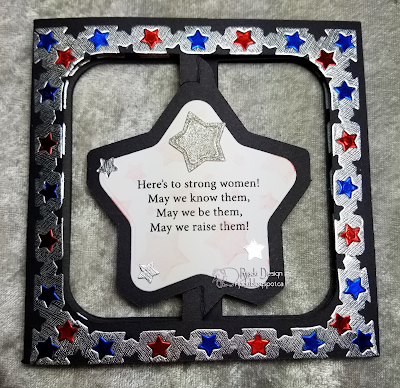 The front shut and the card folded flat, 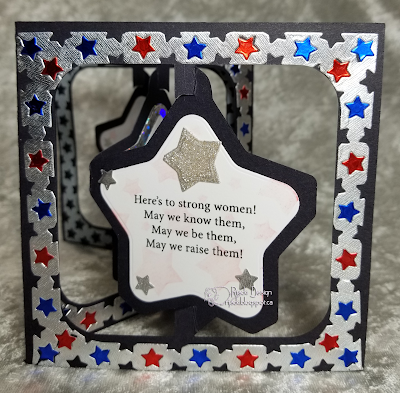 the front slightly expanded viewed from the front, 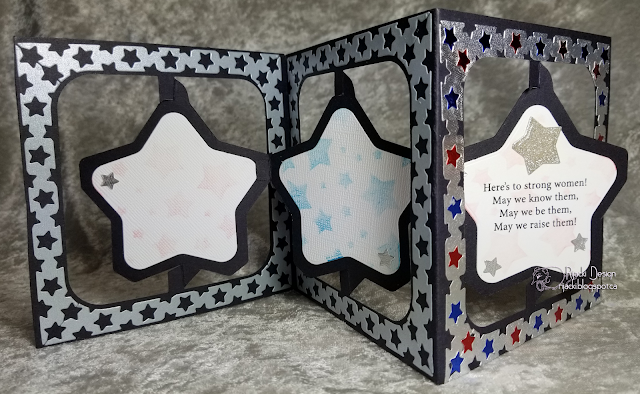 the back with space for a personal sentiment (careful not to break the stars), and, the finished inside which stands up wonderfully. 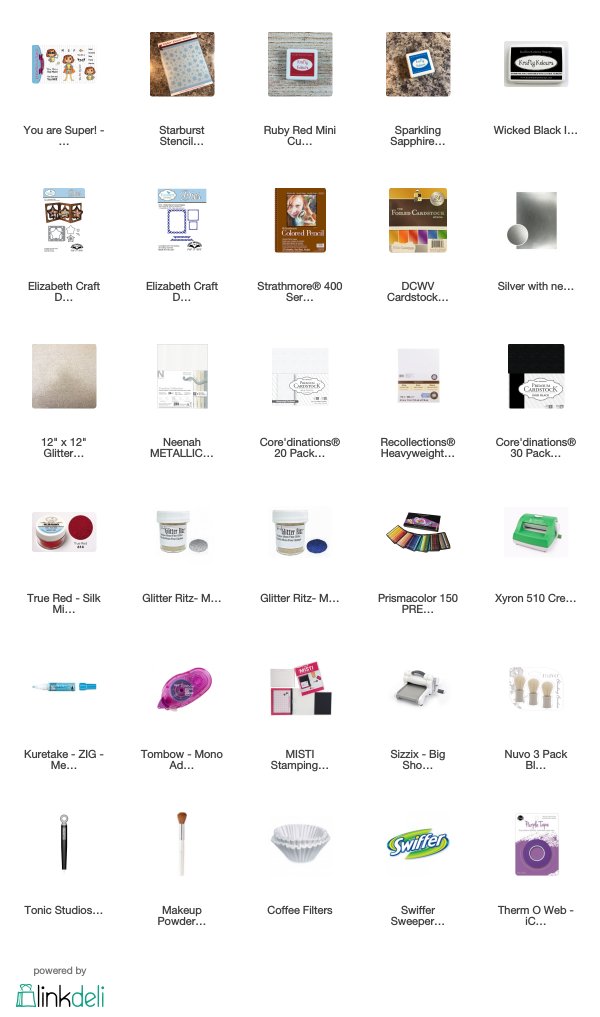