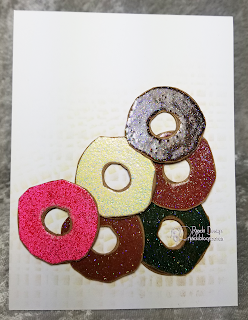 Sometimes the first idea isn't the best idea, but I can get obsessed with wanting to use something in a specific way and... then have to rethink. 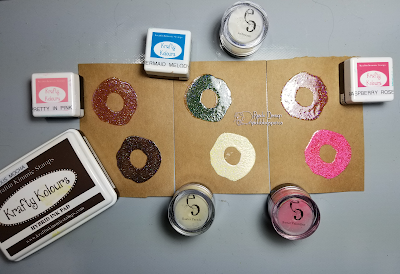 I wanted to make yummy frosted donuts. I triple embossed the yellow and hot pink and then tried Marvelous Mocha with irridescent embossing over it. I absolutely loved the look. It's shimmery yummy chocolatey frosting. I tried three more Kimmie inks, the two pinks and Mermaid. The stamping on kraft does change the colour, the most with Mermaid Lagoon. With the iridescent embossing, they look yummy even if they're not the colours I expected.

I used Nuvo clear embossing ink for the first time on this project and fell in love. I agree with all the positive reviews. I like it's pad better than Versamark, especially for a larger surface like these frosted donuts. 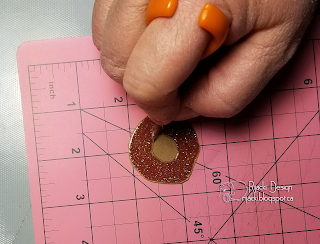 I fussy cut the donuts using a kraft knife for the centres. 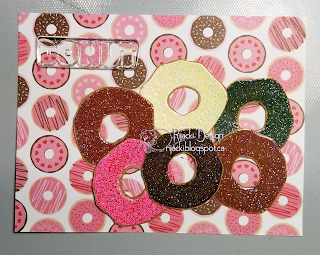 My original idea was to have the pile of donuts on a donut paper. I've had this American Crafts paper in my stash a couple years. 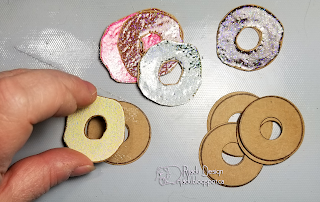 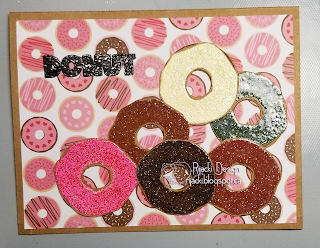 I embossed DONUT on the front with "know how I could forget your birthday" on the inside of a kraft card base. But.. it wasn't singing to me. When I showed my sweetie he didn't get it. His body language matched my own 'meh' feeling about the card. I loved the donuts themselves but the rest.. just didn't do it. 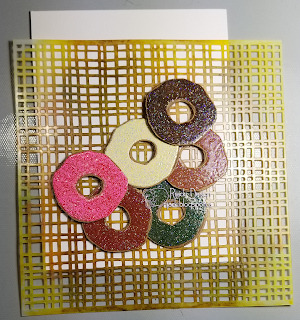 So... I took it back upstairs and gave it a re-think and considered something more CAS-like. For a bit of background detail, I decided on a bit of light stencilling. 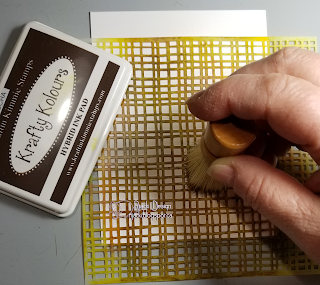 I used a brush to lightly add ink through the stencil. Each swipe, I started in the lower right which would be under the most donuts with a lighter touch going to the upper left, lifting the brush mid-card. 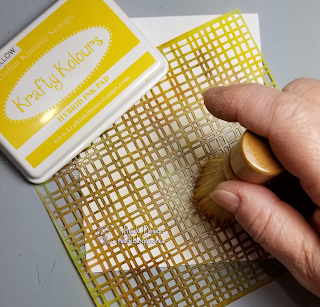 I shifted the stencil to add a second colour. 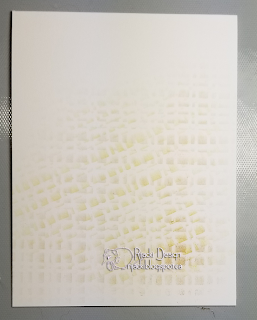 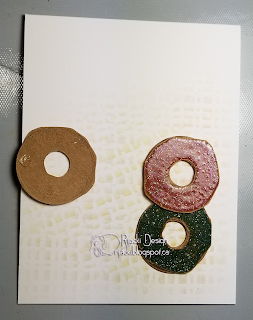 To add the donuts to the card, I used Mini Glue Dots. Earlier I had only used tape runner and it was just too easy to pull apart because of all the embossing. 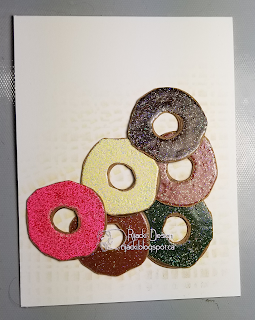 I piled up the donuts with only a few glue dots on each to let them float over the card and genuinely look stacked. 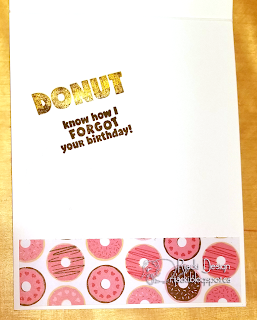 I moved the entire sentiment inside, stamping the DONUT with the yellow and mocha for a textured look. And, I added in a strip of the patterned paper for a pop of colour in the donut-y theme.

All in all, the card is a much better card because I reworked it. 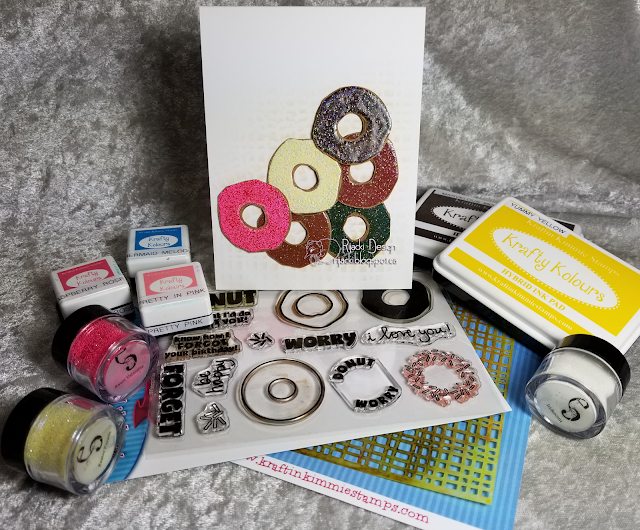 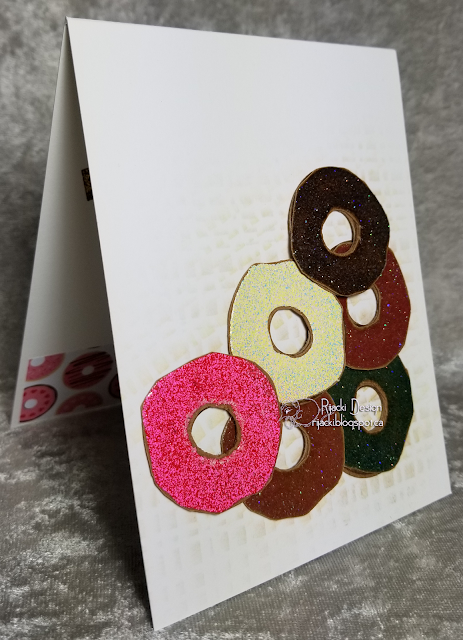 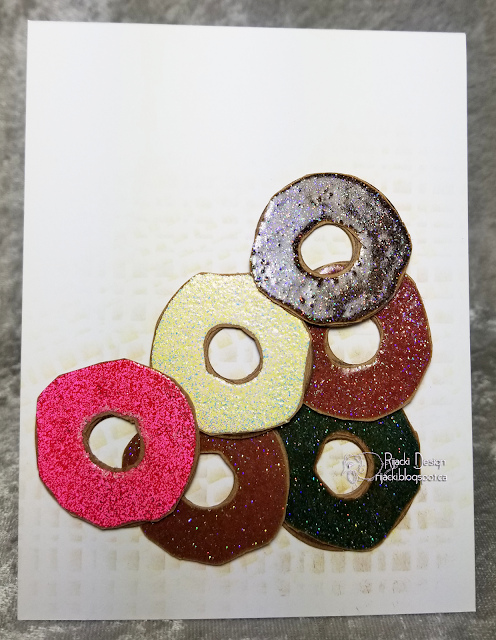 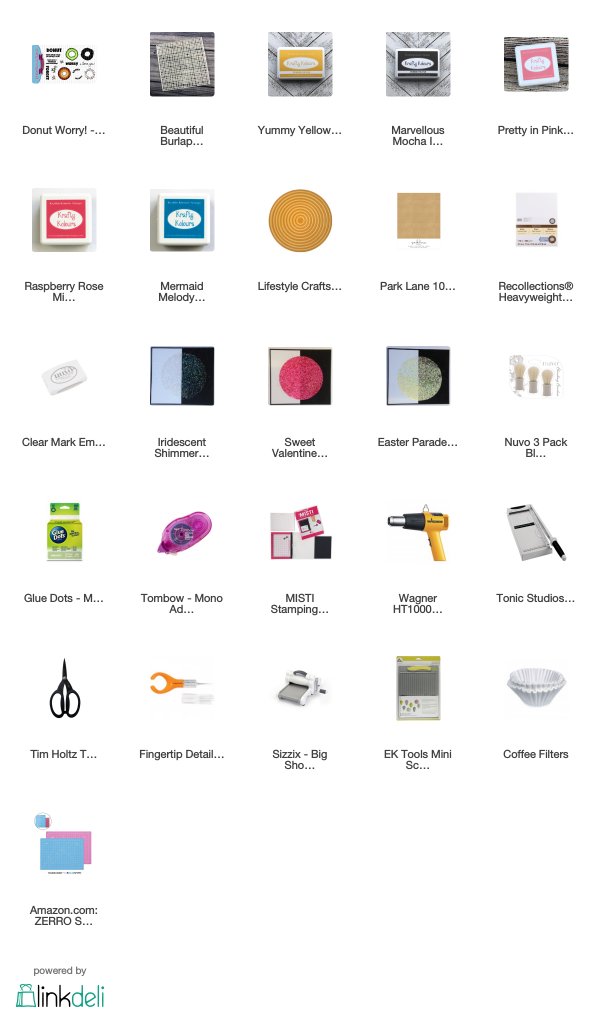