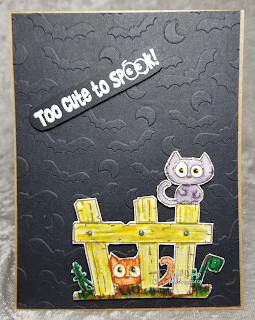 Today is the start of the Kraftin' Kimmie August release sneak peeks. As one of those who purchased the August Krafty Kit, I get to play along with the first of the new sets. Scaredy Cats is a fabulous new set from artist Neda Sadreddin accompanied by one of the new stencils, Bats & Moons, and the new ink, Goblin Green

I coloured one of the images from Scaredy Cats with Zig Clean Colour markers, embossed with the Bat & Moons stencils, and used glow-in the-dark to emboss the sentiment and add a fun detail to the kitty eyes. Turn off the lights for a too cute to spook pair of kitties. 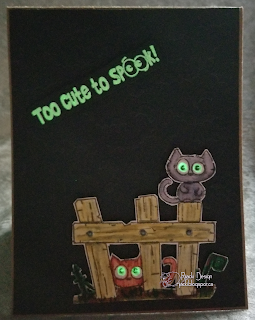 
The August Krafty Kit came with the Scaredy Cats stamp set, Bats & Moons stencil, Goblin Green ink, and Spooky Dots. I used everything but the dots on my card. 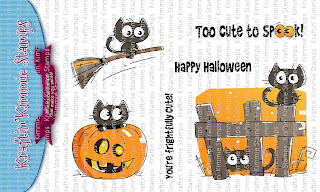 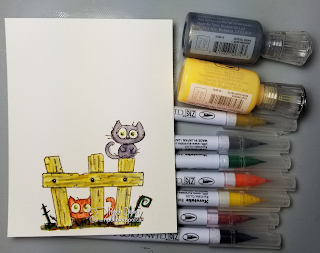 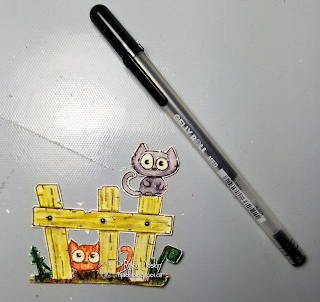 After the eyes dried, I fussy cut the image and used a black gel pen to darker the irises. 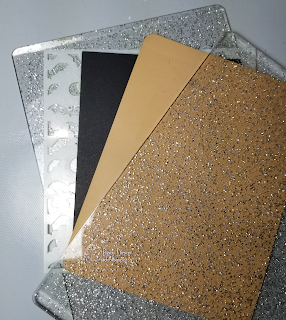 To emboss with the stencil, I used a special sandwich with my Big Shot Plus. I used the Spellbinders tan silicon pad and 110 lb cardstock with two Sizzix cut plates, the Plus standard platform, and adapter A. If I was using the Big Shot with the the two tabs, I would open up to tab 1 and add a bit of extra shimming with the same sandwich. 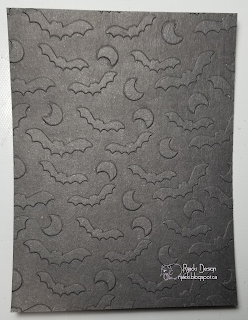 I left the embossing black on black for a spooky background. 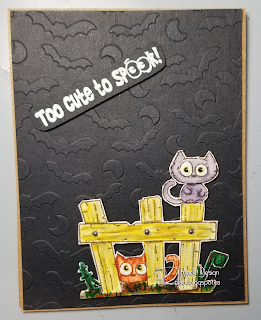 I double embossed the sentiment on a fussy cut black strip. I started with a base of white embossing then added two layers of the glow-in-the-dark. The Glow embossing would otherwise not show up on the black. I added everything to a kraft card base using foam mounting tape to pop up the sentiment strip and the kitties on the fence. 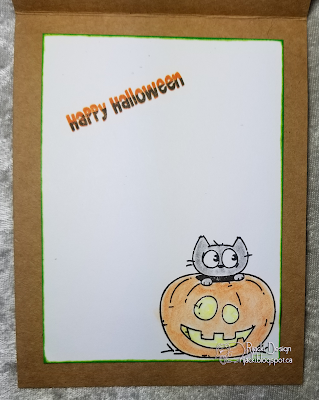 Inside, I used Pumpkin Patch (August's colour of the month) and Wicked Black to stamp the sentiment n a white panel. I also used Wicked black to add one of the other images from the set and Pumpkin Patch to colour the pumpkin with Wicked Black for the kitty. I added Glow Drops to the pumpkin cutouts. I then edged the panel with the new Goblin Green to finish it off. 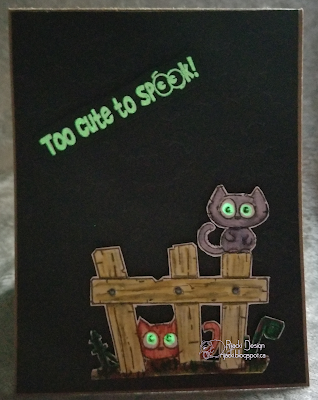 After the Glow is charged up in the light, the sentiment and eyes glow. 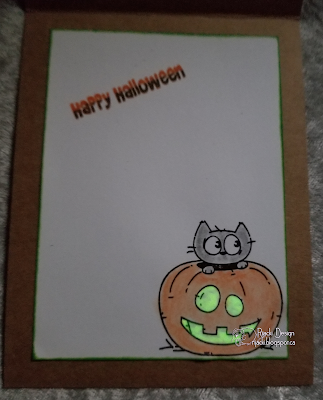 The pumpkin on the inside does, too. 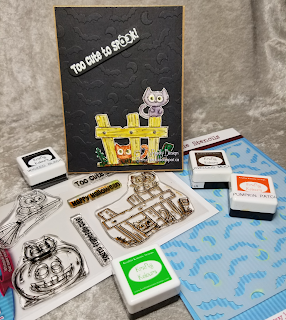 The new release will be available on Saturday, 17 August. I used the Scaredy Cats stamp set, Goblin Green ink, and Moon & Bats stencil to which I added Wicked Black, Marvelous Mocha, and Pumpkin Patch. 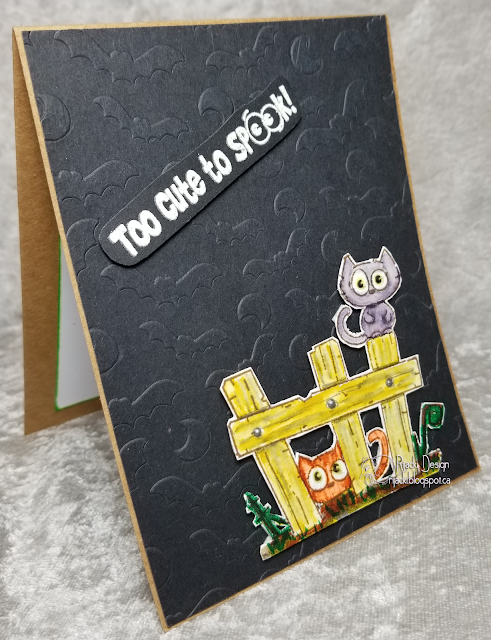 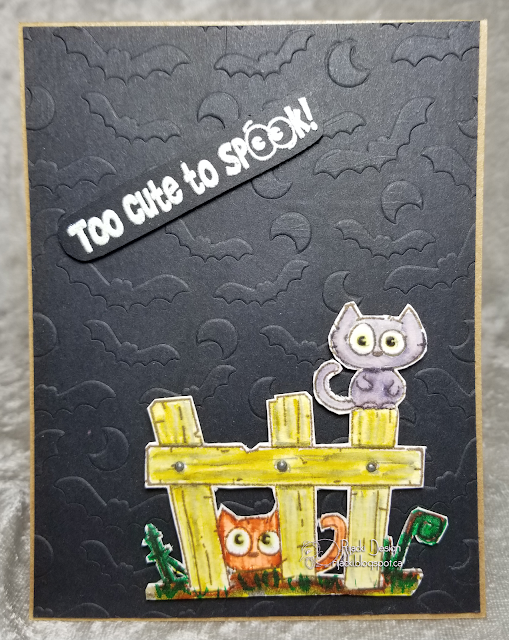 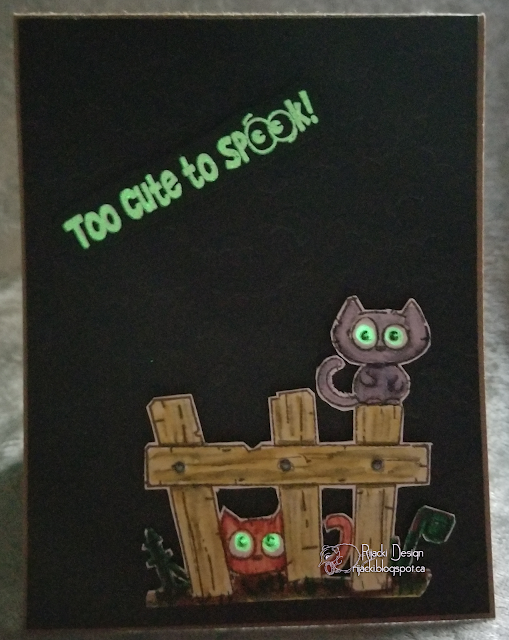 Kraftin's Kimmie is having a Blog Hop to showcase the new release with sneak peeks all week. If you hop along to see her design team creations, you could will a gift coupon to the store. 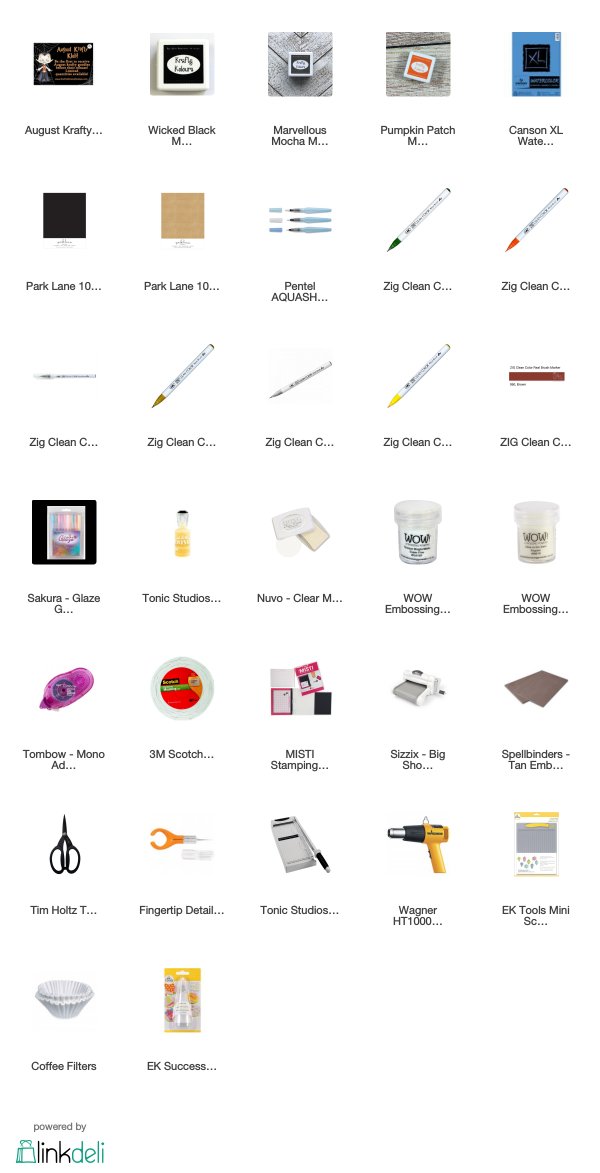