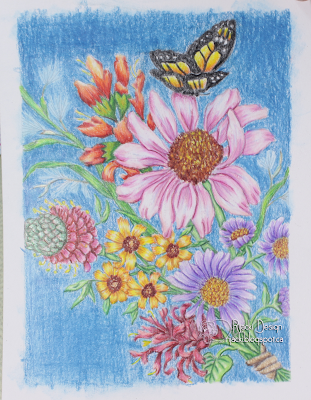 I've been subscribing to the Kit & Clowder classes for a couple months but hadn't taken the time to just sit down with them and colour. I was sick last week and have been recovering this weekend, so it was a great time to do no stress colouring. I opened up the September pencils class and, following with Alyce, I made loveliness with this month's focus on flowers

The Kit & Clowder classes are well worth the price. Not only are they heaps more detailed than most Youtube videos (she colours along with you, most of it in real time), but Alyce gives a lot of encouragement as well. As a subscriber you can also get one on one help from her for any issues you might be having. http://www.kitandclowder.com/


I originally started with my October Design Team project for Sheepski Designs using one of those images but fell in love with the class image so had to get it (and start again from the beginning). You'll see the Sheepski Design project next week when I post it for the blog challenge inspiration.

The featured class image is one from Power Poppy and, as a member of the class, there's a 50% coupon to get it. Some classes come with a free image. Those that don't usually have a coupon for a reduced price.

Included in the image pack is a copy already prepped for an optimal size for the class and for the "no lines" technique. The finished image is perfect for a small frame. It's a bit big for a standard card unless you want to just use part of it on a card. As I said, I fell in love with the image as I saw Alyce working with it. Without resizing, any part of it would be lovely on a card or, just as it is, it's going to look rather lovely in a frame.

The chapters of the lesson are broken down into chapters each of which has a rather nice finishing point. Each chapter tackles a specific aspect of the image. This image has different kinds of flowers which have a different blend and look.

I don't have the full range of Prismacolor pencils so I had to make substitutions for some of the class blends. This is something Alyce not only approves of but encourages. I keep track of what I use on a bit of scrap so I have a reference for myself as much as for blogging. I have found this helps me refine techniques and my own blending with whatever medium I use. For this project, I used Bristol paper which is not the same as what Alyce used. 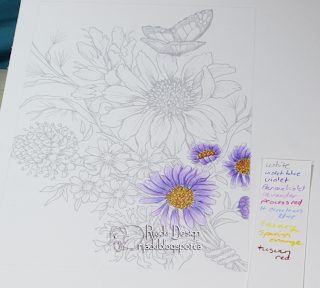 Chapter 1: Alyce's teaching methods are phenomenal. The videos are also well detailed and show what she's doing quite clearly. For brushing away pencil bits, I used a fluffy makeup brush I bought at the dollar store. 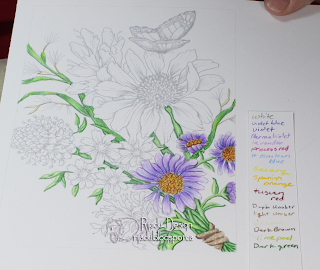 Chapter 2: my list got longer. Starting this chapter was also where I decided I needed a blank colour sheet so I could more easily find the similars for my mixes. I found a chart online: https://transientart.deviantart.com/art/Prismacolor-150-Premier-Colored-Pencil-Chart-273397018. Now, too, I know exactly what colours I want in addition to my 72 pencil set (the remaining 78 *laugh*). 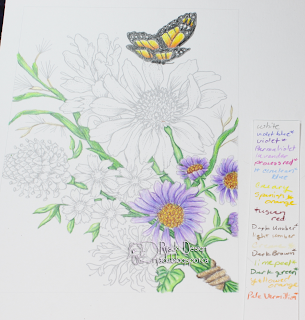 Chapter 3: I'm going to use the butterfly techniques on other projects. I embellished on this one a nudge. I also started marking the colours that I used as subs vs the ones Alyce uses. 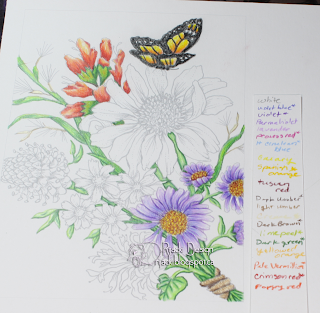 Chapter 4: Some of the chapters are longer than others but most are around 30 mins, I think. None feel rushed or overlong. 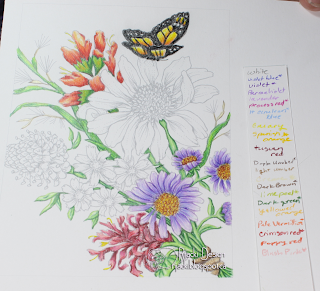 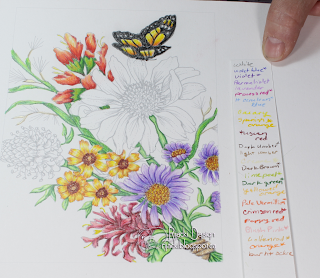 Chapter 6: In the video, Alyce relayed that she chose the image for the variety of flowers with different types of elements allowing the class to cover several different techniques. 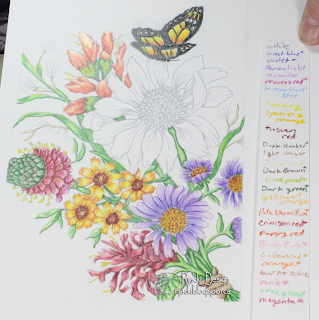 Chapter 7: It's really cool to watch the image... bloom. 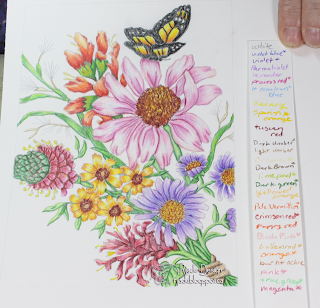 Chapter 8: The list of colours got long because flowers are really rather colourful. I did a lot of pencil sharpening. I'm keeping the shavings for a future resin project. 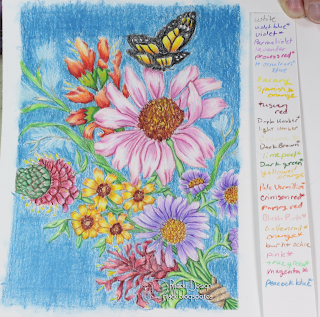 Chapter 9: Alyce uses slate for her background, but that's not in my set. I don't have any greys, actually. So, I decided on Peacock Blue as a contrast for the colours in the flowers. I really do need to expand my set. I also used a 5/16 tortillon when a much larger stump or stub would have been better. I really was looking for a larger one like Alyce used, but all I could find, locally, a few months ago, were the thin tortillions. I've got the larger ones on my wishlist now, too, along with more pencils (and more alcohol pens, too).

Before starting this class I did have some knowledge of basic art techniques and know about shadows and the colour wheel. I haven't had any formal art training but I have picked up quite a bit at various times in my life. But, I learned quite a lot in this class. I had several "ahhh" moments about this particular medium as well as colouring in general.

In short, I recommend trying one of the free classes as a prelude to subscribing to the monthly classes. http://www.kitandclowder.com/ 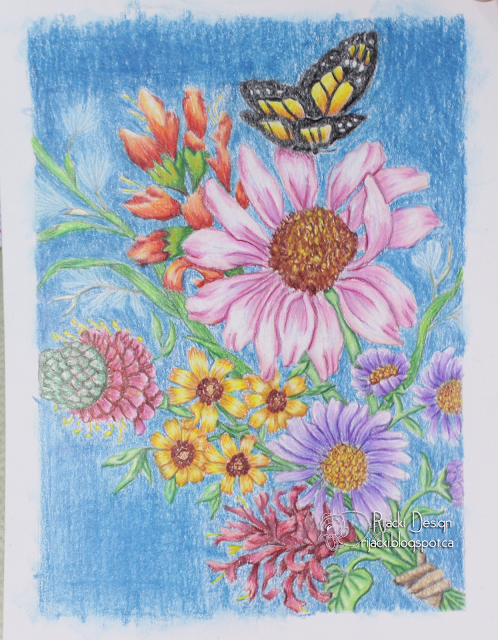 Now to find some time to do the marker class *laugh* The September marker class features a different flower image also from Power Poppy. Most months have a different featured image for the two classes following a similar theme. You can use the same image for both, though, and you don't have to be enrolled in both classes, but there is a 'discount' for both vs each separate.
Posted by Kate 'Rijacki' Ledum at 21:45