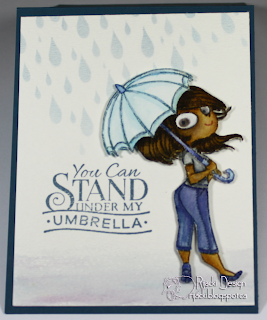 A sassy offer to share an umbrella in a soft rain, because you make me happy when skies are grey. 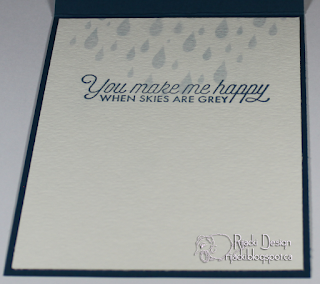 Kraftin' Kimmie Stamps has great image and sentiment stamps. I just love them. And, when I found out, while watching CHA 2017 videos, that Southern Ridge Trading Company is making stencils with some of the same cuts as their embellishments, I was over the moon!

I like rain. I really do. Which is a good thing because I live in the Pacific Northwet.. err Northwest.. of North America. 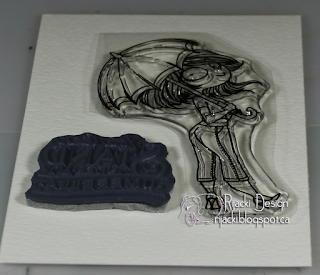 I first did the layout on a bit of A2 (4 1/4" x 5 1/2") cut cardstock to see if the idea was going to work. I debated doing a single layer or having the girl "popped up". Either way I would have needed to fussy cut if I wanted a background, for a mask or the painted image. I opted for layered. 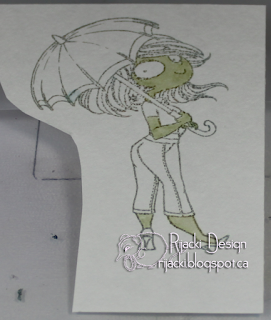 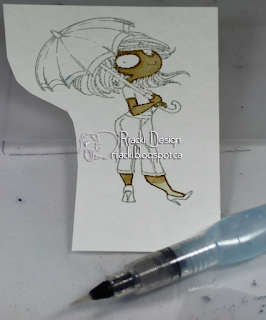 I used Tea Dye shaded with Vintage Photo to start the skin colour. 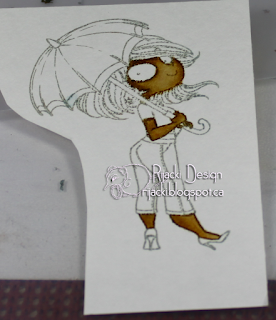 I added in Rusty Hinge and more Vintage Photo on the skin and was well pleased with the way it was looking. 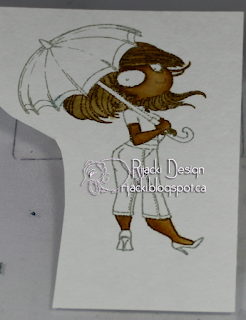 Starting on the hair, using Vintage Photo as the base, you can see how lovely the skin is. For the hair I went on with Ground Espresso for shadowing, Walnut Stain for colour, Black Soot for more shadowing, and finally Rusty Hinge for brightening up the highlights. 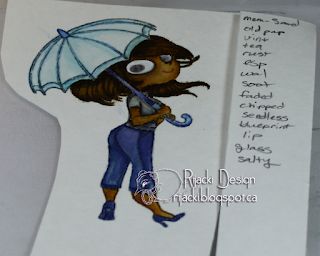 Her pants are the darker blues, Faded Jeans and Chipped Sapphire with a touch of Seedless Preserves and Blue Print Sketch. Her shoes to match. Her top is Hickory Smoke (oh I forgot to write that down *laugh*) with shadowing in Black Soot and Chipped Sapphire. The umbrella is Tumbled Glass, Salty Ocean and the other blues already used for shading.

I added Black Soot to rim her eyes and fumbled a bit. I ended up getting a little 'bleed' into her skin which darkened the area around the one eye with my attempts to correct it. Poot :( But I was also running out of time to finish.. 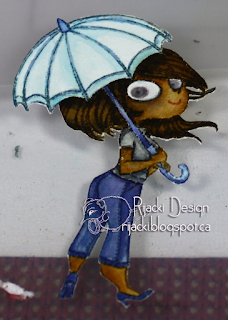 I fussy cut the image. While adding colour to the edges, I kept looking at her eyes, not entirely happy with them. I then added just a touch of Wild Honey to the brown irises and that helped. The extra colour for her eyes is not show in this picture, since it was taken before colouring the edges. 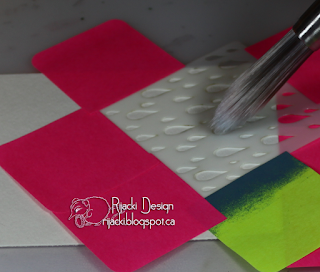 I wanted a rainy background so I used a 3" x 3" stencil I recently bought from Southern Trading Company and a Clarity brush. I brushed on Stormy Sky and Salty Ocean. I used the brush instead of a blending tool for a softer look. I masked off the areas I didn't want rain drops. I had decided to only add them to the top. 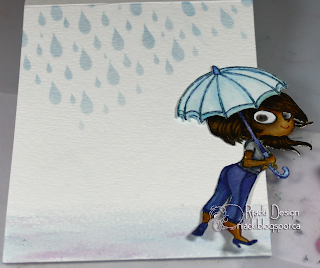 I also added a wash to the bottom of the card using Stormy Sky with a touch of Seedless Preserves. 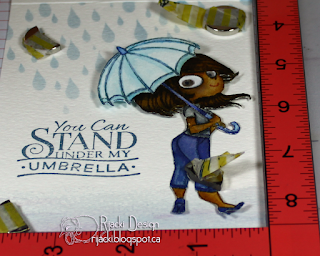 To add the sentiment, I used the Misti. I dry fit the layout with the girl in order to get the sentiment position. I used Aegean Blue for the sentiments to fit in with the look of the card.

I recently bought the Aegean Blue ink pad on clearance at Jo-anns when I was in the Seattle area for my birthday. I almost didn't get it. I am so very glad I did because it's becoming my 'go-to' for sentiments when I don't want a stark black. The greyish blue has proved to be perfect for several projects in just the short time I've had it. 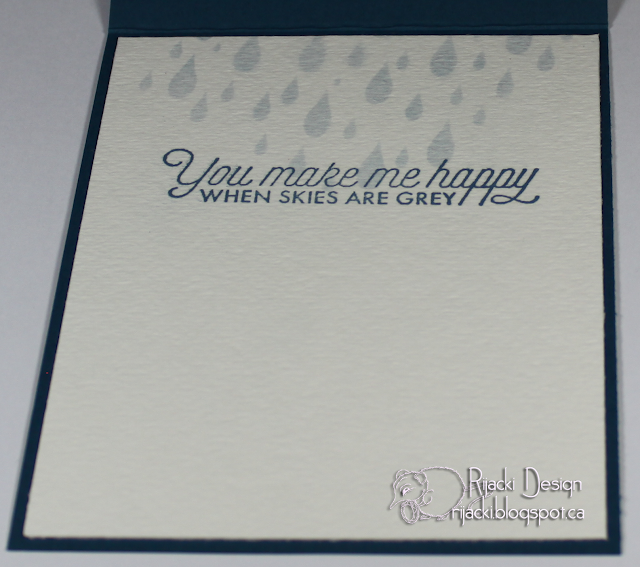 For the inside, I also added some stenciling with just Stormy Sky before stamping the sentiment. 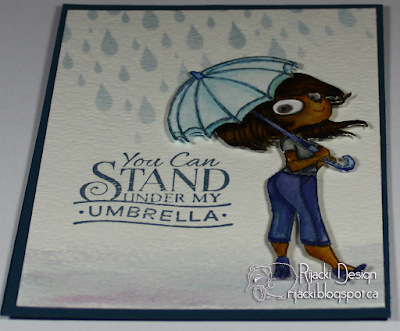 I'll let you in on a secret, I didn't plan to use a dark blue card base, but I accidentally did the inside stenciling on the back of the card front, not the inside as you open the card. Ooooops. But.. that boo-boo caused me to cut the heavy watercolour cardstock base I intended to use so I went with the darker Not Quite Navy from Stampin' Up. I'm actually glad I had the flub, because the dark border really adds a bit of punch. 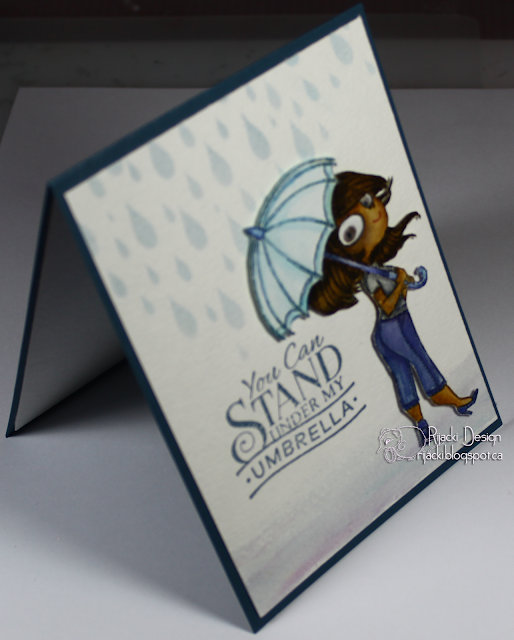 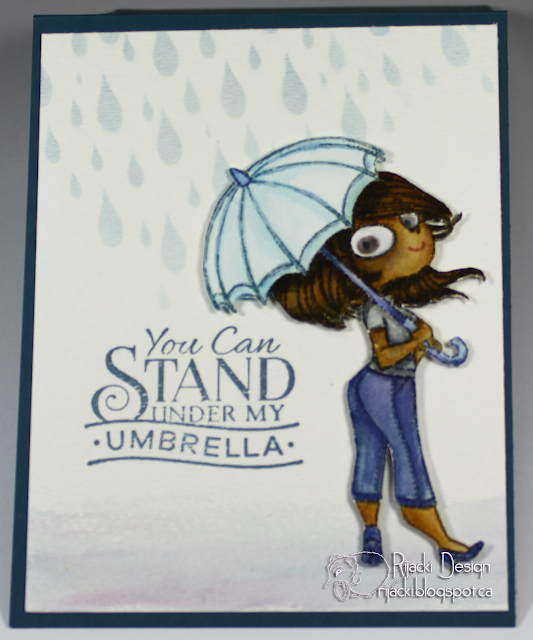