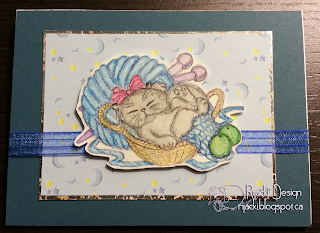 I generally paint kitties black or dark grey is because all the kitties I have 'owned' have all been black, not intentionally just happenstance. My current kitty, Scout, is no exception. 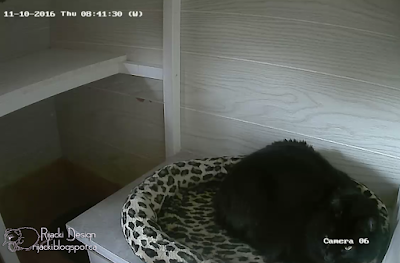 Scout is a black kitty that sometimes likes to sleep in unusual places so I can easily imagine him sleeping in a yarn basket (especially if I took up knitting). While we're on our trip, though, the only way we can see him is on the camera at the Cyber Cat Lodge where he is staying the two weeks of our trip to see family. It would have been too stressful for him to take him with use, not to mention too expensive.

I miss my kitty *sniffle*. While I was making this card I was thinking of him the entire time.

We're on a two week trip to visit family in two different US states (we live in BC, Canada). Each segment of the travel from one spot to the next involves 2 airplanes and a bit of a layover in an airport in addition to the waiting time after going through TSA before the plane boards (and we like to get to the airport early just in case there are issues). While planning for the trip, I decided I wanted to do -something- during that wait time. I decided to paint. I brought watercolour pencils in a brush tube and packed my waterbrushes with my other TSA approved liquids in the quart baggie. 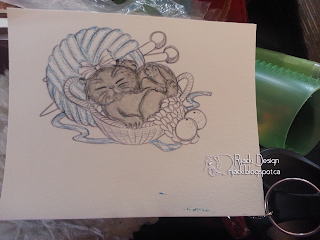 In the airport, I propped the brush case with watercolour pencils on my carry-on pile so I could see the coloured backs to select a pencil at a time. I used the water brush to move the pigment from the pencils into the areas I wanted to paint. 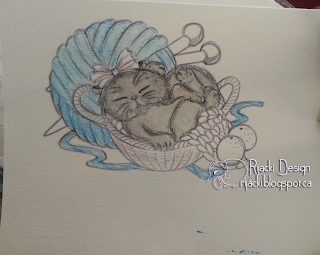 I had done some other painting, too, so only got the kitty half done before our boarding began. 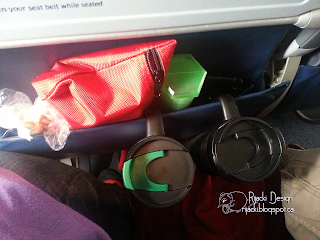 When I got on the plane, I made sure my pencils (green thing) and other little supplies (red thing) were easily accessible.

Travel tip: If you're flying, you can take empty insulated coffee cups (or refillable water bottle) through TSA (security checks) and then get them filled in the pre-boarding area. Sealed, insulated, metal-lined cups like this pair from Starbucks last forever (I've had some for a decade so far) and don't spill when closed which makes them great for carrying on and off planes or other such. 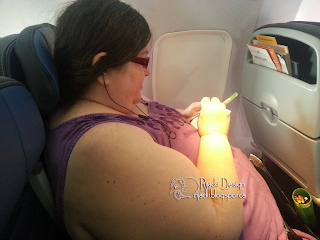 I asked my sweetie to take my picture while painting on the airplane. Yes, I really was painting. I finished painting the image while in the air. It was a bit bumpy in spots, the flight not the painting, so I am glad I didn't have a brush skip moment. 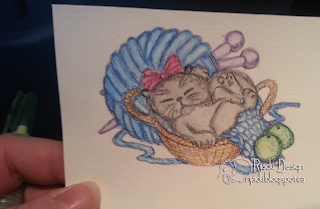 Painting all done, waterbrush still in my hand. 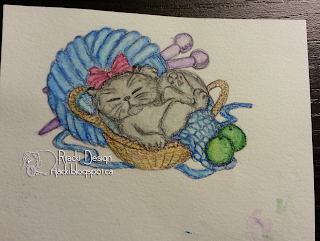 In the hotel room, I added Wink of Stella to the knitting needles and knitting weights for a bit of metallic shine. When using Wink of Stella on watercolour, it is important to wipe the brush after using it on a coloured area. It will likely pick up some pigment when the watercolour paint/pencil reacts with the liquid.

I decided to use a sketch from The Sketchy Challenge for the card layout. 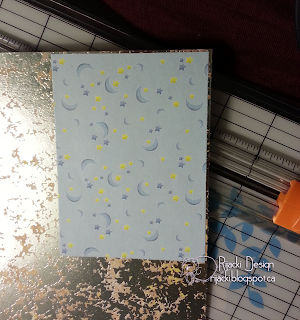 I thought this moons and stars paper was perfect for the sleepy kitty and decided I wanted a very thin silver-y border. To get a real thin border, the easiest thing to do is adhere your top paper to the matting to have a thin matte edge on at least 2 sides. 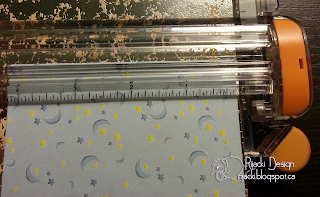 Then line up the cutting edge with the top paper giving it a thin edge. The Fiskars trimmer has a wire running through showing where the cut line will be. 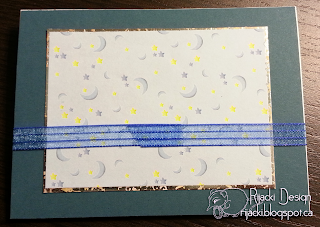 I adhered the Not Quite Navy card stock to the card base before I remembered the ribbon, so it is visible inside the card. Since the image was going to cover the front centre, I joined my ribbon at that point, completely hidden in the finished card. 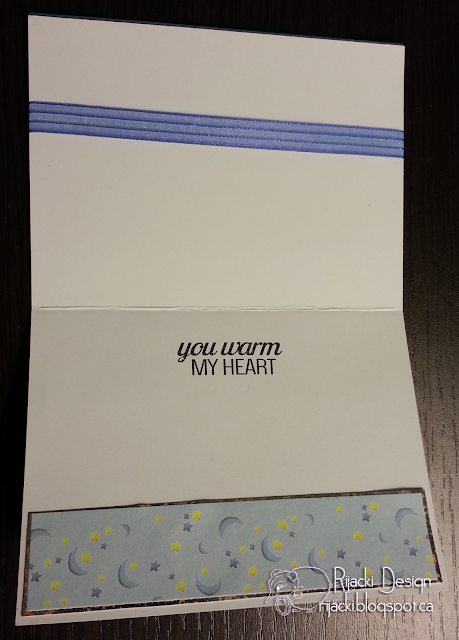 From the small stash of stamps I brought with me, I found a suitable sentiment for the inside. I also used some scrap of the moon and stars paper and mercury silver to add an interior detail. (If I had my full stamp stash, I might have chosen a different sentiment, but I like the simplicity of this one, too.) 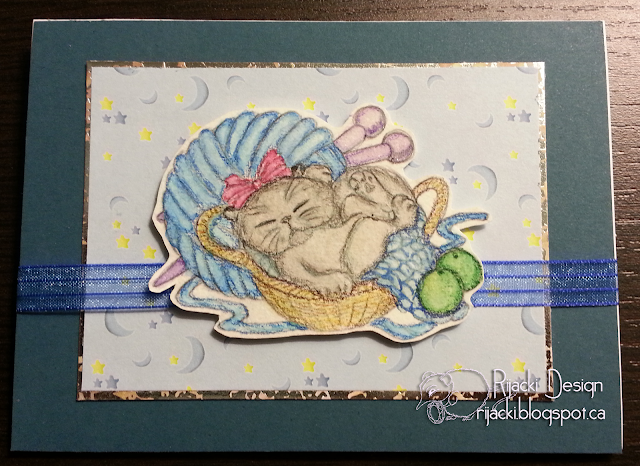 I popped-up the kitty image with foam mounting tape to give the card just a little bit of dimension. 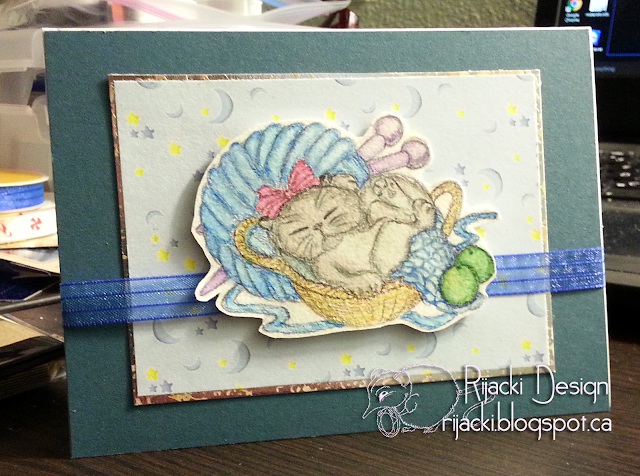 And now for pictures of my sleepy kitty. Scout is approximately 3.5 years old and is deaf. He was a rescue from a local SPCA shelter. Because he spent time in the shelter is why we're worried he might be thinking we abandoned him. 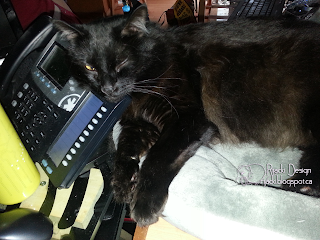 Scout is the perfect customer service agent, waiting for your call. 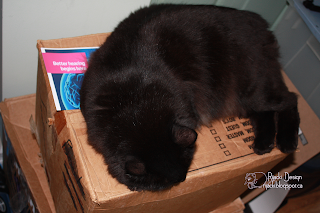 This picture is funny because of the pamphlet on the box. Scout is deaf. 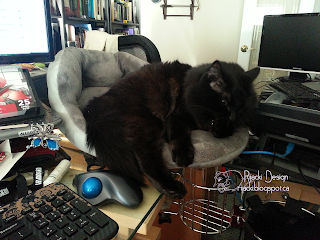 Scout's bed is on a shelf between my desk and my sweetie's desk. He gets a lot of attention that way. He likes attention but isn't really a cuddle kitty. He has a loud purr when he's been pets. He likes belly and chest rubs, too. 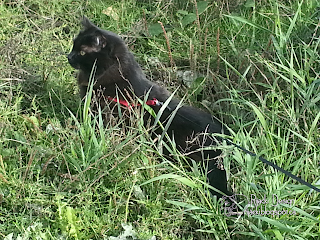 Scout likes going on walks and seeing new places that he can 'scout' out. He likes meeting people and loves meeting new dogs. He also likes 'watching' birds (though the birds never want to meet him). We talk him to the local Farmers Market and parks often. He also goes to the pet supply stores when we need to get food or other stuff. He gets fawned over by the people at the stores and lots of treats and attention.
Posted by Kate 'Rijacki' Ledum at 14:42