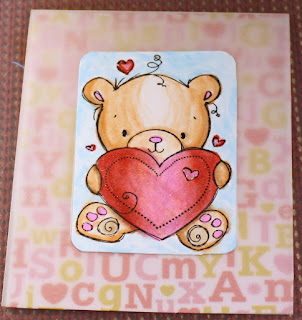 The inspiration for this card came from a few things at the same time. I've been recently marathoning Youtube videos done by Jennifer McGuire, and a recent one I watched was on a technique using vellum as the card front and really like the look. I've also started looking at more challenges because not only is it a good way to stretch my abilities but it's a good way to get seen and possibly win free stuff since many of the retailer sponsored challenges have a random give-away attached. Free stuff, Woo! Anyway, the Monday Challenge for Simon Says Stamp on 28 March is "We Can See Clearly", use some element of transparency in the project. Ooo, says I, I have been wanting to do that. I thought to stamps I have and then the ideas started swirling in the little grey cells. I already had a cute little coloured piece I made and didn't know what to do with. It would be lovely with a vellum card front. 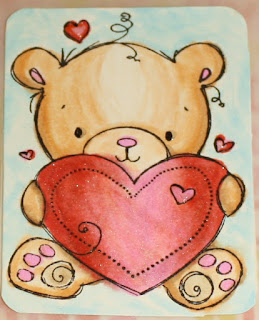 The day I bought my Chameleon pens, I watned to try them out and start to learn to use them. I had recently gotten Bear Hugs from Kraftin' Kimmie Stamps and thought it would be a good first piece because it is simple lines without a lot of tiny intricate detail. It took me lots of tries and a couple days learning the pens and getting more comfortable with them, but I finally coloured it in a way that I liked. I trimmed the piece and set it aside to find a home for it later. The big heart has Wink of Stella to give it glitz. The little hearts, including the one on the big heart, and the bear's eyes have Glossy Accents.

As I am putting together this post, I realise I didn't take pictures of a lot of the steps. I'm still working on writing up the making of things. I'll get better, I promise :)

First a disclaimer: I wasn't watching the video while making the card. I had actually watched at least a day or so before making the card so I was going off of memory of the concepts and idea so I didn't do things exactly the way she did. This also means I kinda sorta, well rather missed some of the steps or did them out of order. But I like the way my card turned out anyway *laugh* I would, though, make it slightly differently in the future.

Since I made the image panel before choosing the patterned paper, I had to choose paper to go with it. I had a pretty clear idea in my head for what I wanted and have been working on a hoa.. collection of various papers and cardstocks.

I wanted to make a card to fit in a small envelope and to be a top opener. I decided to have the finished card be 4x5".

With my paper trimmer, I cut my vellum to 8x4". I cut white cardstock and Paddywhack paper to 4x5". I don't have a score pad so I use the groove on my paper trimmer. I also misplaced my bone folder, so I used a clay shaper because it has a nice small ball on the end. I scored the vellum at 5".  I could have cut the vellum at 6". The short side will be sandwiched so the short part only needs to be enough to hold the vellum in the sandwich. I, of course, forgot to take pictures of the cutting and scoring.

The 4x5" white cardstock will be the back of the card. Put adhesive on the short part of the vellum on the 'outside', the backside of the fold. 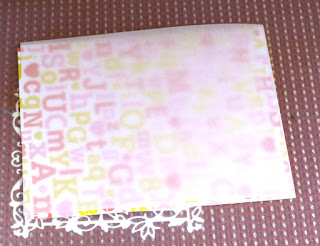 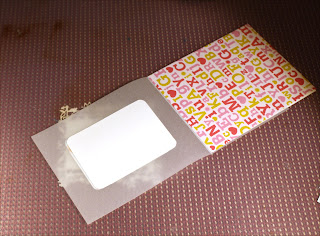 Since the patterned paper would be tough to write on, I cut a smaller white cardstock panel to go under the image. I cut it smaller than the image panel to make sure it would be hidden. 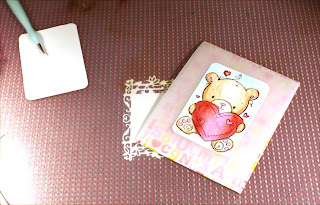 This is where I didn't follow the technique very well. I should have affixed the inside witing area first, then lined up the image panel to cover it. Instead, I added this panel last and so had to line it up without seeing it's placement as easily. I had to adjust it a couple times before firmly adhering the adhesive. 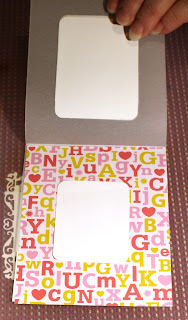 I debated adding a sentiment to the front of the card but I think it's cuter without. I did, though, trim the edges and bottom to make it straigher. 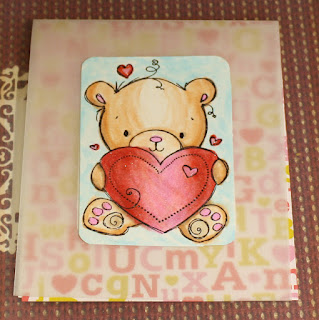 Challenges for this card: